New Hampshire has a rich history of covered bridges. 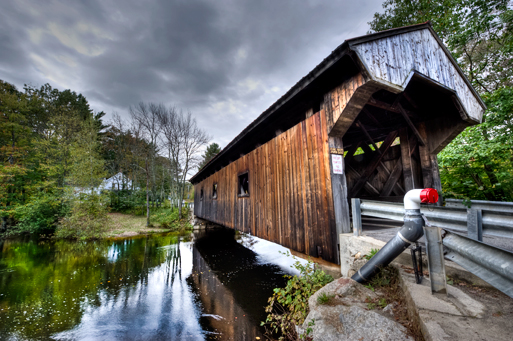 The Waterloo covered bridge is located south of N.H. Route 103, two miles west of Warner Village on New Market Road across the Warner River in Warner. The structure was completely rebuilt in 1857 by Dutton Woods of Contoocook. It was rebuilt a second time in 1970, at a cost of $16,300 under the state Town Bridge Aid Program. Finally, the bridge was rehabilitated by the state in 1987 at a cost of $3,000. The Waterloo Bridge is listed on the National Register of Historic Places.  The bridge is 76’4″ long with a clear span of 70’9″. It has an overall width of 16’11”, a roadway width of 12’11”, and a maximum vertical clearance of 11’10”. It is posted for six tons. 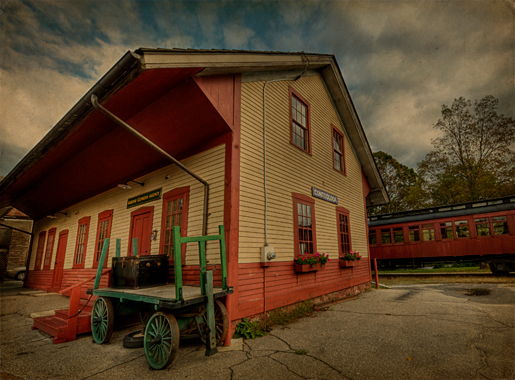 In 1844 the town of Hopkinton was having great controversy over the construction of a railroad. There was a deep social agitation throughout the town. This was partly due to the “right of eminent domain.” There were many arguments about “What is eminent domain?”, and whether or not railroads were legally such that the government could take over private property for public use.

This was not a local controversy. Many town in New Hampshire felt the same way. At this time it was not conceivable that within a period of five years options would change.

In 1848, the large group of people in the town of Hopkinton who were so strongly opposed to the railroad, were equally earnest in promoting the advancement of the railroad. In 1848 the Concord to Claremont Railroad was chartered and the first train went through Contoocook early in 1849. For about three years the train went only as far as Bradford, due to the hardships of laying the rails through Newbury Cut.

Contoocook Railroad Station was constructed at this time as was Tyler and West Hopkinton, making three stations in the town of Hopkinton. It is interesting to note that at this time Contoocook was still known as Contoocookville, and this is the name which was put on the station when first built.

In the fall of 1850, when trains were running regularly through Contoocookville, a day of great festivity was held. Railroad officials extended the favor of free rides to and from Concord. Needless to say trains were filled to capacity.

Contoocook decided to show its appreciation. Money was raised by public subscription. A public dinner was provided. A bad was hired, the artillery called out, and speeches were made by celebrities. About one thousand people were fed on the station platform, the food costing about $300.

For many years four or five trains and two freights ran daily until the early 1900’s. As cars and trucks became more popular the trains became less popular. By 1950 only one train and one freight were running.

Contoocook Railroad Station was finally closed in the spring of 1954. The building was purchased by Dodd Insurance Agency. This company occupied one side of the station and the Contoocook Library was housed in the other side until 1959.

This entry was posted in New Hampshire. Bookmark the permalink.