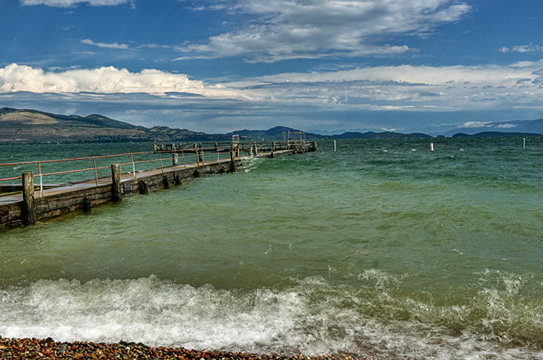 We have landed in Polson Montana on the southern shores of Flathead Lake.  The Mission mountain range flanks the eastern shores on the lake and make great cherry orchard country.  At 28 miles long, 7-8 miles wide, and more than 300 feet deep the Flathead Lake is the larges natural freshwater lake west of the Mississippi.

Back to the cherries….  The first white settlers on the eastern banks of the lake arrived in 1891 and quickly hit on the idea of growing cherries there.   Fruit orchards were established all along the eastern shore of the lake.  Although they’re subject to periodic killing frosts, Flathead Lake’s cherry trees are productive enough to supply farm stands and roadside vendors around the region.  That is until we showed up!  These smaller deeper red cherries are tart and tasty.

This entry was posted in Montana. Bookmark the permalink.