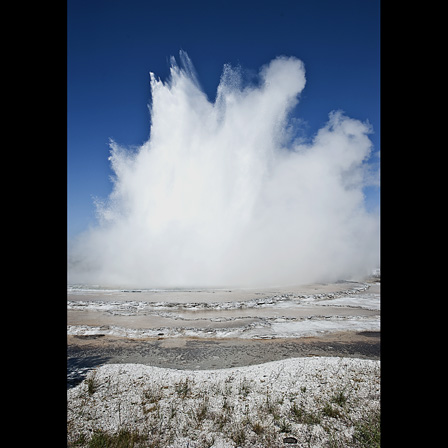 Yellowstone is always steaming, fuming and erupting somewhere.  This is the great fountain geyser as it erupts sporadically every 9 to 12 hours.   As the geyser gets ready to erupt the water in the center starts to boil and overflow to fill the fountain tables.  It is truly amazing to watch.   We enjoyed waiting for the eruption and hit up a conversation with a couple from England.

Great Fountain Geyser sits in the middle of one of the prettiest sinter formations in the park. The sinter forms a series of terraced concentric reflecting pools around the geyser.  Even if the geyser isn’t erupting, it is worth driving past to see the pools. Great Fountain is a fountain-type geyser, erupting in a series of bursts through a pool of water. Its interval between eruptions ranges from 9 to 15 hours but its short term average interval is usually stable enough that the eruptions can be predicted to within an hour or two. Great Fountain’s maximum height ranges from about 75 feet to over 220 feet. Its duration is usually about one hour but durations of over two hours have been seen. Great Fountain is a major geyser, but many people, when hearing it erupts to over 200 feet, are disappointed by its more common maximum of less than 100 feet. For this reason, Great Fountain has earned a number of pejoratives, such as The Flounder. The smaller eruptions of Great Fountain are still large and pretty but pale in comparison to the truly huge eruptions. Great Fountain erupts in a series of distinctly spaced bursts. The first group of bursts lasts about ten minutes. Then there is about a five minute quiet period followed by another five or so minutes of activity. These quiet and active episodes continue until the end of the eruption. Usually the first period of activity is the tallest and strongest, with the first and sometimes the second burst being the strongest of the eruption. Sometimes, the largest burst will occur during the third active period. This especially seems to occur when the first period has been uninspiring. Rarely, large bursts will continue long into the eruption.

Great Fountain is the only major geyser you can truly watch from your windshield. This is especially nice in bad weather.

This entry was posted in Wyoming. Bookmark the permalink.